WAIT!! Don’t skip this post or hit delete. Though, like me, you might already be over the whole Pumpkin Spice thing (thanks to the ever early arrival of the Pumpkin Spice Latte) give this post – which includes a recipe for the Pumpkin Spice Bread and a video- a chance. The thing that convinced me to dive into the Pumpkin Spice waters myself was a simple statement from one of my gluten-free clients. “I love pumpkin bread but I can’t eat it so I don’t want to  make it”. That was it. That became my mission. I had to get off my “no Pumpkin Spice” high-horse and create her an awesome gluten-free pumpkin bread recipe. The resulting bread, toasted and spread with sweet Maple Walnut Compound Butter, tasted more like a dessert, especially since I did stir in a few chocolate chips, but is still somewhat virtuous since it contains coconut oil and maple syrup instead of the typical vegetable oil and sugar. Now it’s your turn. Make it, eat it and you will find it not only fills your body but feeds your soul with the comfort we all seek with the chillier Fall weather.
This is what I do with my life. I want everyone to experience TablaVie (Life at the Table) so if I’m not actually providing healthy food for clients, friends and family, I provide the means for anyone to be able to create healthy, real, gluten free food at home. This means sometimes I have to start from scratch and create something new or many times I tweak a recipe I find to match my philosophy. Though this post is about pumpkin bread, it all started with banana bread.

One of my lovely boys WILL NOT eat banana anything. I mean like “Sam I Am” will not eat them! I always have bananas that are begging to be made into banana bread in my freezer (especially in Texas where they go bad between sunup and sundown in the summer!) so despite the lack of enthusiasm on his part, I wanted to create a banana bread recipe to use up these bananas. The gluten-free banana bread I originally found was from The Art of Gluten Free Baking and it did indeed look delicious but I try to avoid sugar as much as possible especially when it will potentially be a breakfast food, so I did the science and math necessary to use maple syrup and coconut oil instead of sugar and butter (not that butter is bad, I just didn’t have any when I was ready to make this) and used walnuts instead of chocolate chips to keep it in more of a breakfast vein. For the record, I would totally use the recipe as is if I was strictly making a dessert, however, and probably top with ice cream, caramelized bananas and caramel.

As I mentioned, the other day when I was with one of my clients, she told me she was craving pumpkin bread but couldn’t have it because earlier this year she discovered she was gluten-intolerant. Statements like this always touch my heart because I remember seven years ago when I was told for the third time by a third doctor that I needed to cut out gluten (I’m a bit hard-headed) I finally decided I should probably listen and I was devastated. Within minutes of leaving the doctors office in Sonoma, I was wandering up and down the aisles at Whole Foods literally in tears. All I could see was what I couldn’t have. 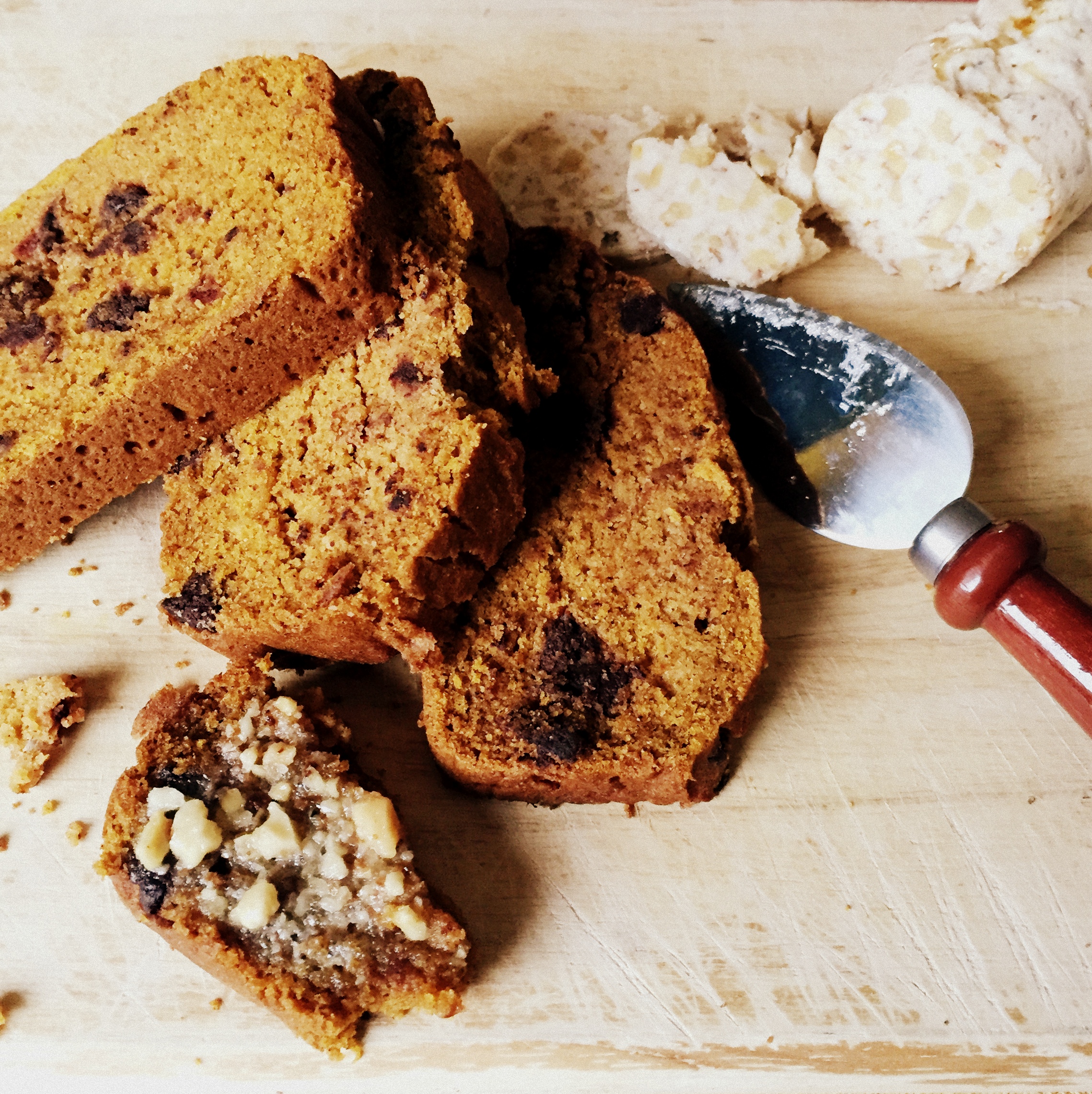 Shortly after that I decided that it would become my mission to create recipes that would help me and others enjoy eating gluten-free. I didn’t want to just tolerate cardboard textures and flavors and pretend it was okay.  Since then, I have been able to provide my friends, family and clients with delicious gluten-free meals and treats that they actually rave about. Many of them have since discovered that they, too, feel better when not eating gluten and my food gives them hope. But even those who request “extra gluten” in response to our gluten-free lifestyle have expressed surprise and even shock when I tell them they are eating gluten free.

After my client said this to me, I confidently told her in the moment that I had a recipe for pumpkin bread assuming I could take that banana bread recipe and simply substitute pumpkin. This of course meant recipe testing to prove my spontaneous theory correct and BONUS, should it prove true, I would also an alternative to banana bread for the one who won’t eat bananas but loves pumpkin things.

Thankfully, I was right. With one simple substitution, we had AMAZING gluten-free, maple-sweetened, coconut-oil-moist, Pumpkin Spice Bread!! It truly is so good that it may even end up on my Thansgkving table instead of the hallowed pie (maybe with chocolate chips and walnuts and ice cream on the side.)

Do you have any favorite recipes that you think you can’t eat because you can’t have gluten? Go Ahead. Challenge me. Your request might just be my next mission.