When I made the commitment to eat what was in season, I found that in August and September in Texas, eggplant was prolific among my farmer friends that I regularly bought from at the farmers’ market. I had never been exposed to eggplant and wasn’t even sure what to do. I did, however, know that I was in love with regional Italian cooking so I looked up recipes for eggplant and found Caponata that was from Sicily and included capers and olives. Loving all things olives, I decided to give it a go. We were hooked. 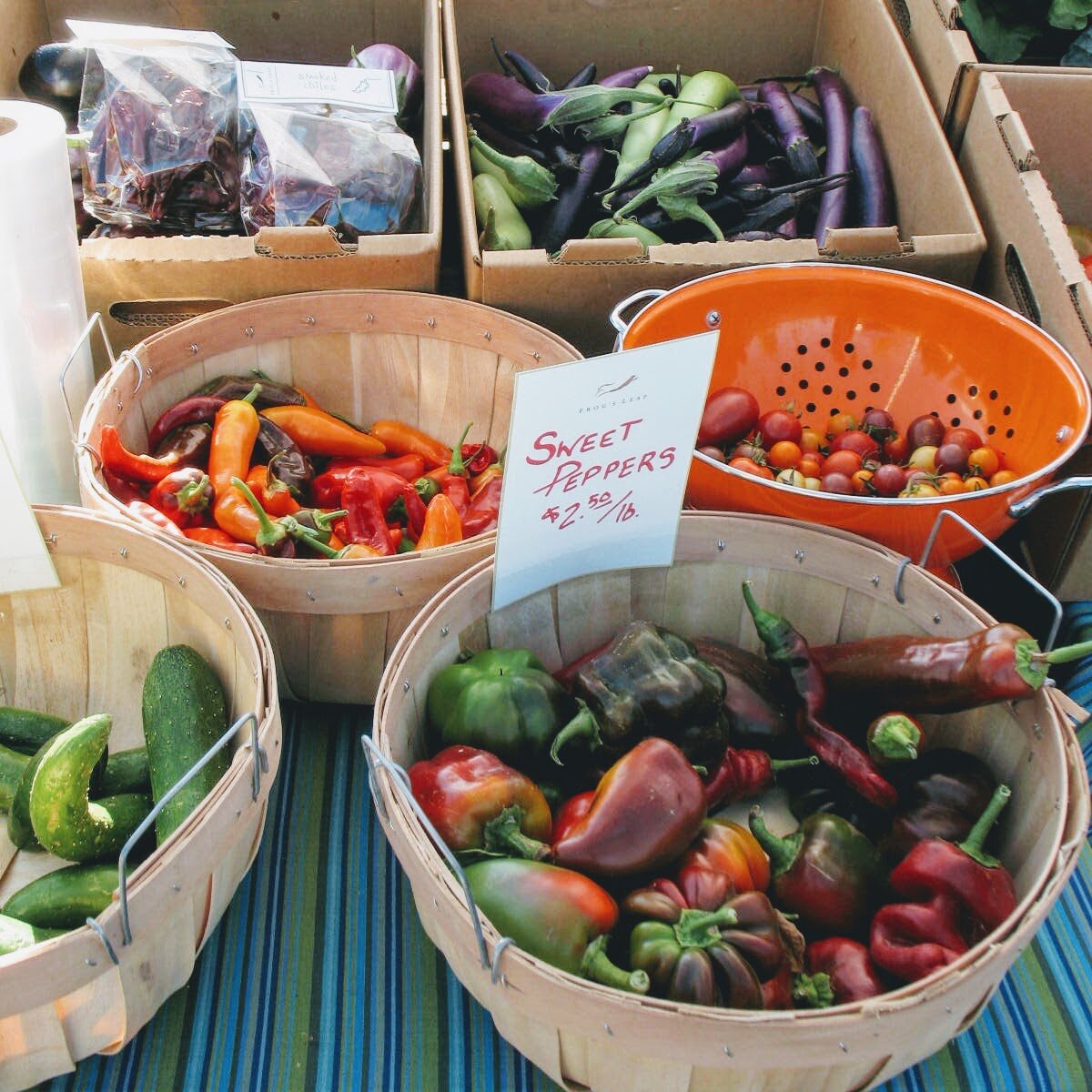 The Stars of Caponata

The “what grows together goes together” mantra must have started in the Mediterranean and it is so true for this dish. In late summer, tomatoes, eggplant and aged onions (besides the also ubiqtuitous peppers and cucumbers) are abundant and these are the main ingredients you will find in every caponata recipe. Sicilian food, in general, also has a little spice in everything as Sicily is a very warm island off the southernmost end of Italy, therefore you will almost always find either chopped hot peppers or red pepper flakes in any recipe for this dish. Tomatoes show up either as tomato paste or fresh tomatoes that are peeled and chopped, but they need to be perfectly in season, sweet and meaty. Most tomatoes grown here are for size and not flavor, so tomato paste became my go to, though in our brief time in California, I always used fresh tomatoes since every possible size and color grew there.

The other ingredients you will find in caponata are definitely the supporting cast. A relish needs to have sweet and sour elements and a little variation in texture. As I previously mentioned, olives and capers are typically involved and pine nuts are added for a little crunch and texture variety. I use slivered almonds since pine nuts are VERY expensive, however and it is almost as good. Go with pine nuts if you can, however, at least once. The sour element is typically a vinegar, most often red wine vinegar and something sweet such as raisins and a little extra sugar or honey to balance out the vinegar. Some recipes contain a bit of chocolate but that never sounded great to me. If you take the time to look up caponata recipes, you will see many different iterations as each Nonna in Italy has her own way of doing it and passes it along to her family who in turn change it up to meet their tastes. The recipe below is my version that has evolved over the years.

What to Eat It With

Our favorite way to eat caponata was always with grilled or toasted bread as part of an appetizer or picnic spread, but as we have phased out most carbs in our lifestyle, we now favor it with fish. Swordfish would be the most typical fish from the Sicilian cuisine, but we have eaten it on whole grilled branzino, salmon and grilled mahi (pictured here.)

The One Technique You Need to Know

There is only one technique you need to know for caponata – Leave It Alone. The eggplant is a sponge and you want it to brown. If you place eggplant in a pan and stir it, it will steam, however if you place it in a single layer in a hot pan with a little oil, it will get nice and brown. The first three steps of the recipe are pictured below. 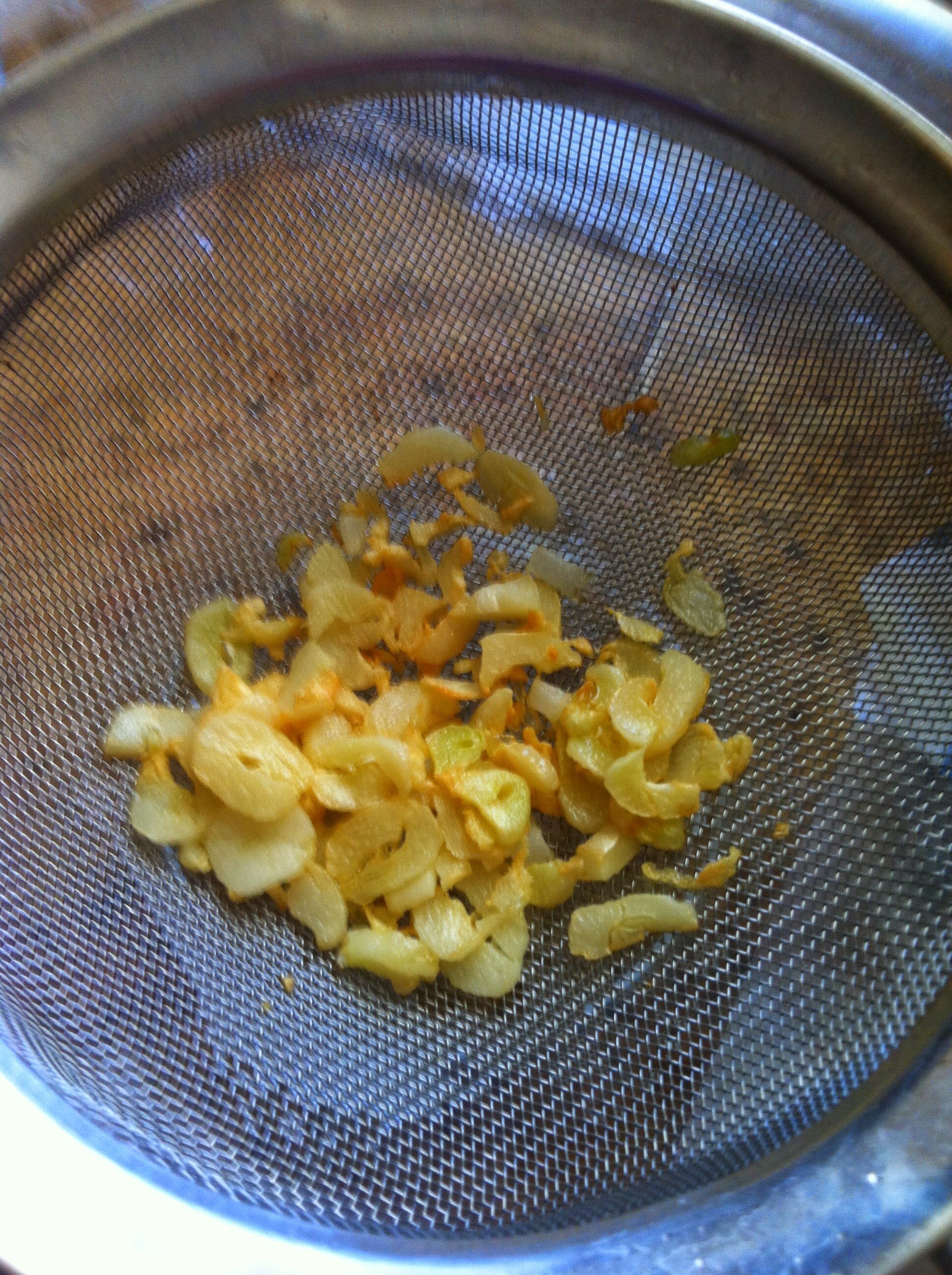 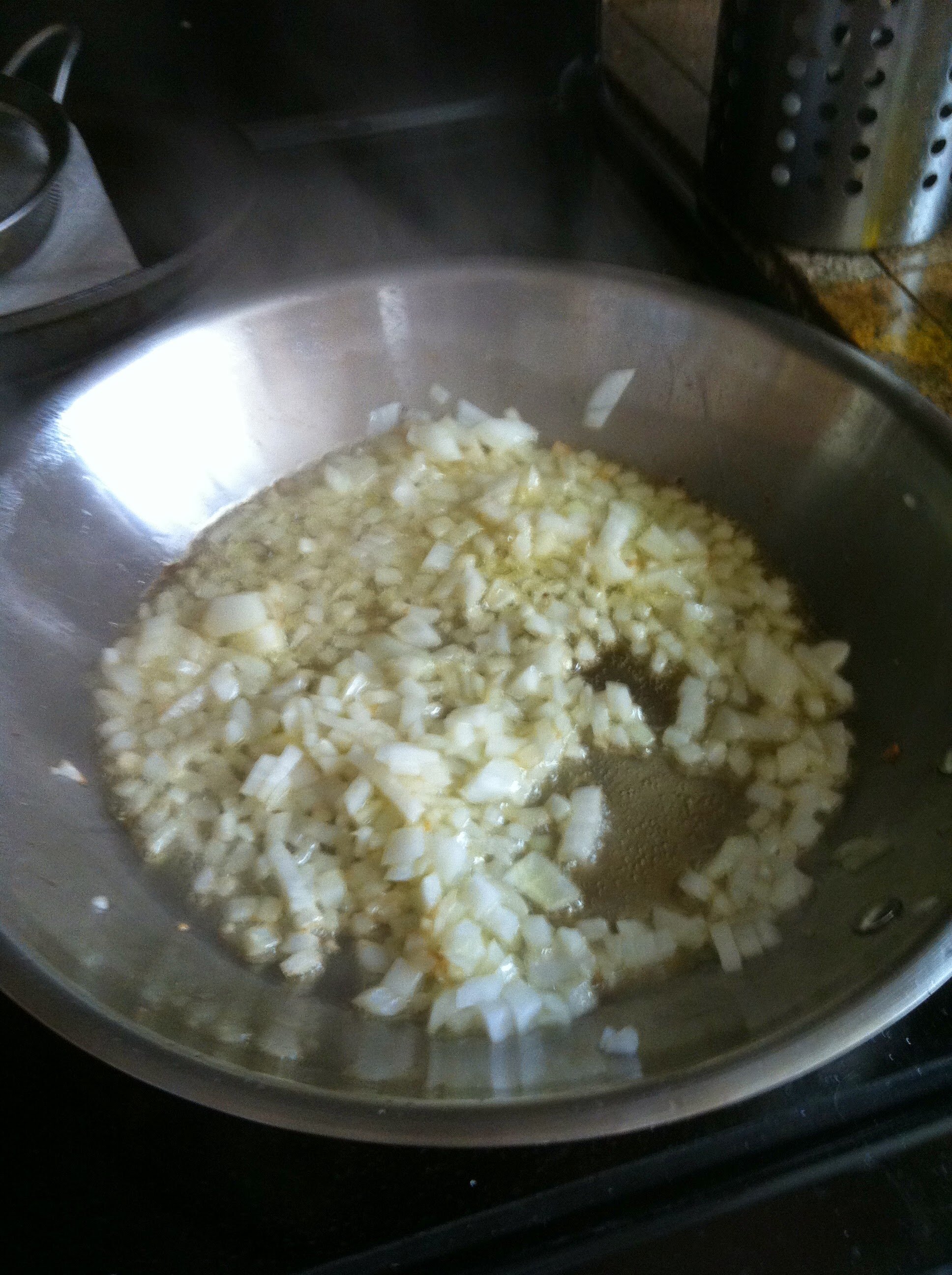 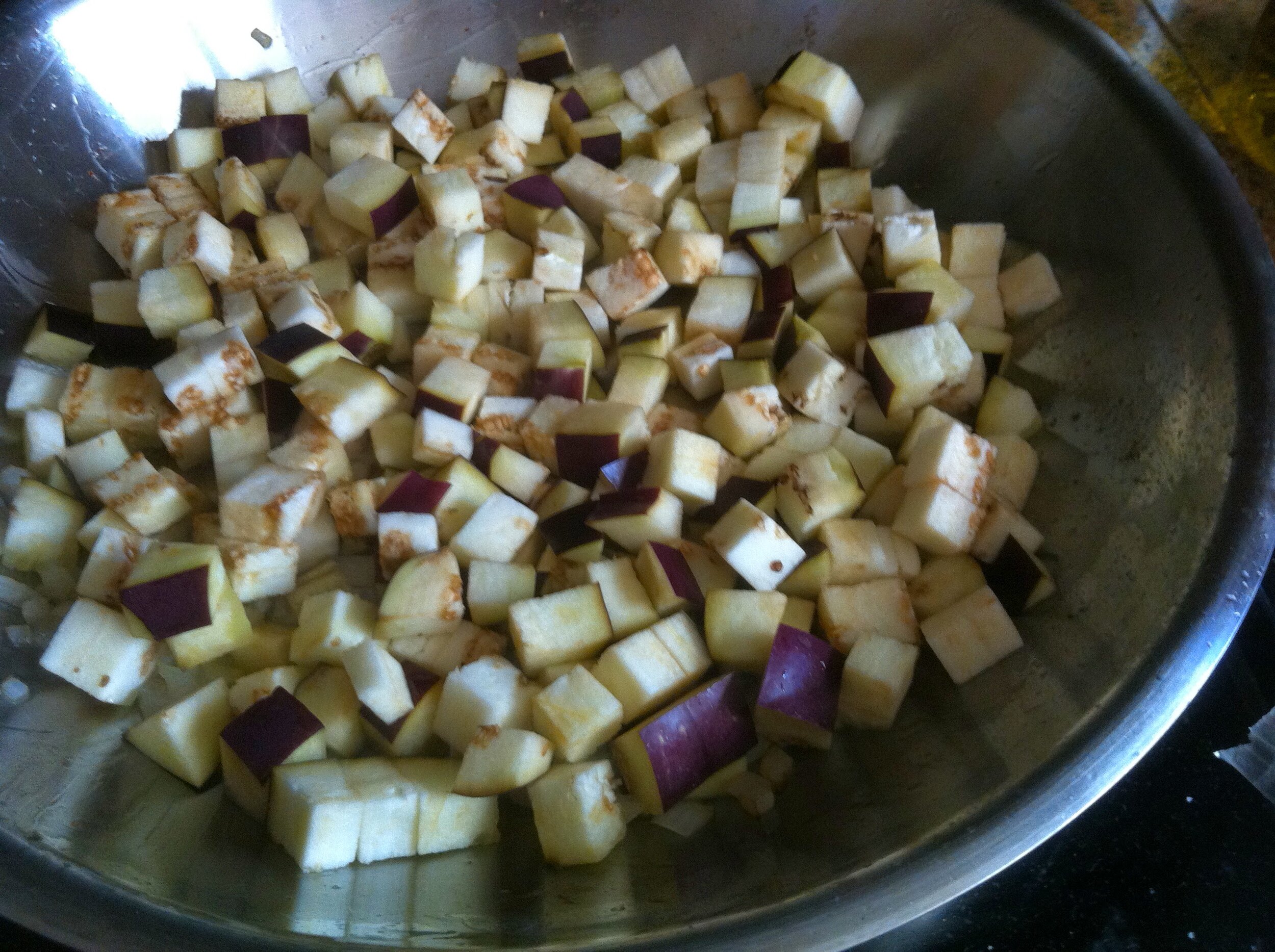 We home cooks like to feel busy so we tend to mess with things too much, but to get that awesome brown color that also signifies deep flavor, we need to let food sit on heat without being bothered.

This recipe depends on a balance of sweet and sour. To get that without using added sweeteners as in the recipe below, and stay compliant with Whole30, soak 1/4 cup raisins (in addition to the ones in recipe) or one pitted date in hot water until they plump. Blend them up with the soaking water until it becomes a thick sweet liquid. Strain it to remove any solids (or leave them in for further texture) and mix with the vinegar. Add in Step 7 instead of sugar and vinegar. 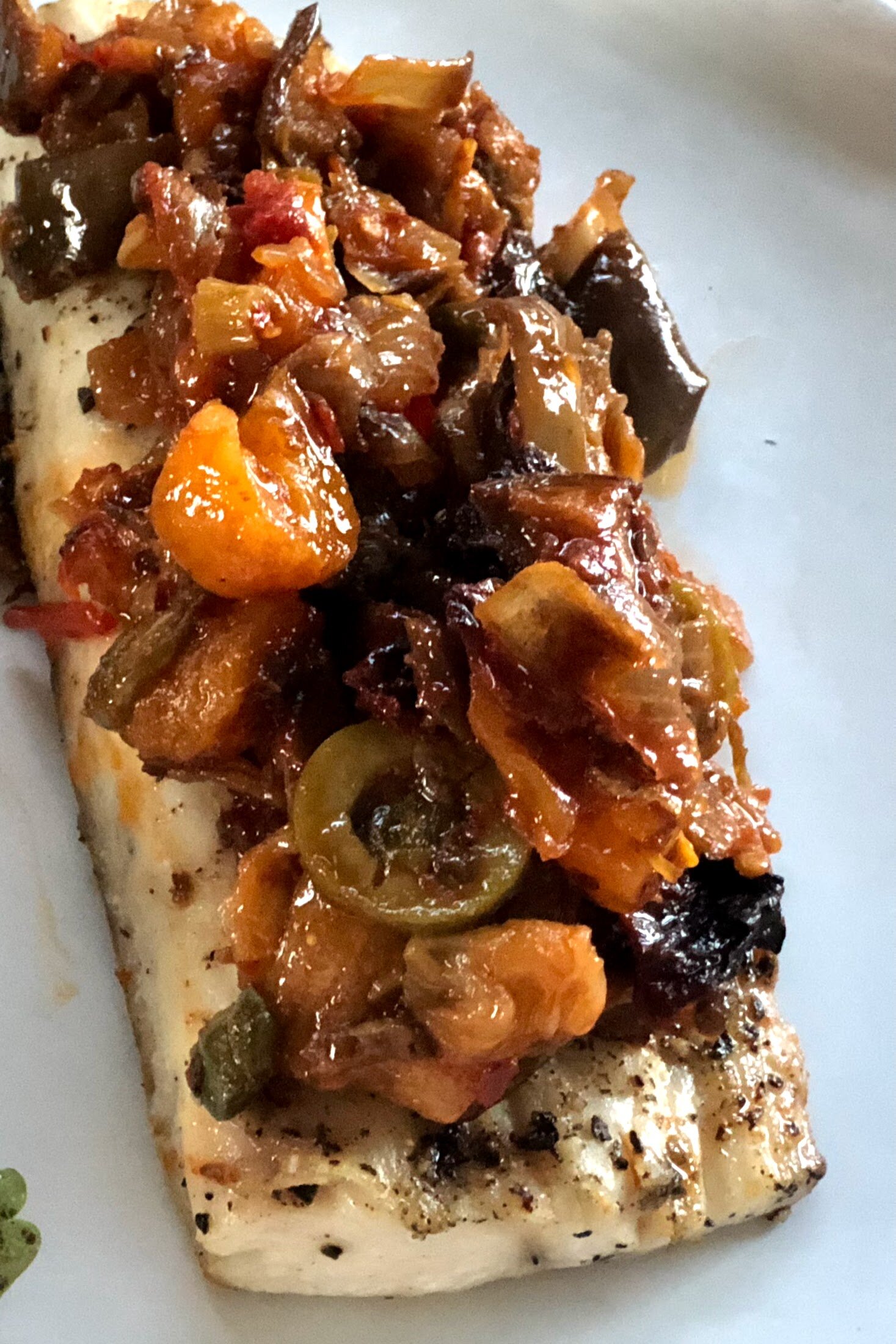